Although I can not say I am impressed about the speed with which my complaints have been dealt with in the past, things have improved and the Securities Commission (SC) has promised that better systems are in place now. For instance a complaint will be immediately acknowledged and the complainant will receive the name and telephone number of the manager in charge handling the case. Any uncertainty about the status, just pick up the phone and dial the manager.

Within 15 days one will receive an answer on the complaint, otherwise a file will be opened for the ones that need more study and work.

The year reports of the SC can be found here: 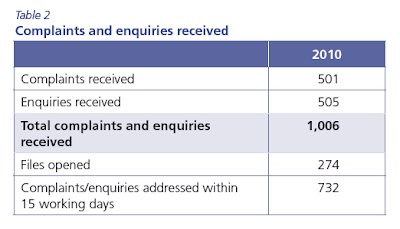 The more serious cases are the ones where files are opened, 274 or about one per working day. Not a bad number but with the high number of corporate exercises and (unfortunately) quite a few of them being controversial (to say the least), the number should really have been much higher.

Why is it important to lodge complaints? Because without a complaint the Securities Commission might not take action, they might not know about the issue (there are more than 1,000 listed companies) and even if they know about the issue they might not be able to pursue each one. But when a serious complaint is lodged, they have to look into it, open a file and start a serious investigation. There are good people inside the Securities Commission, and although I have been (very) critical in the past, I do also see clear improvements. A few perpetrators have been sentenced to long jail sentences and the number of fines has increased dramatically (Bursa Malaysia also has increased its fines). There have been a few good cases recently like Bandaraya's RPT being abandoned and EPIC being forced to offer a MGO and cash settlement, my guess is that the SC might have put pressure on the companies behind the scenes.

I have again lodged a few complaints not too long time ago. Although I will not fight tooth and nail in these cases, I still found it important enough for the SC to look into, since all Minority Investors deserve a decent deal.

More information on how to lodge a complaint:

"What should be in the complaint?

Efficient and effective processing can only be done if information received is accurate and complete. Even though a complainant is not required to furnish any more information than he/she wishes, critical information required to enable proper evaluation of the complaint includes:

You can consider sending a copy to the Minority Shareholder Watchdog Group: