Yesterday the independent advice regarding EPIC (Eastern Pacific Industrial Corporation Bhd) was send to the shareholders. The independent adviser Alliance Investment Bank found the offer "fair and reasonable" and advices shareholders to accept the offer. No surprise there, but to be honest, the advice was quite decent.

However, I was very pleasantly surprised by the following: 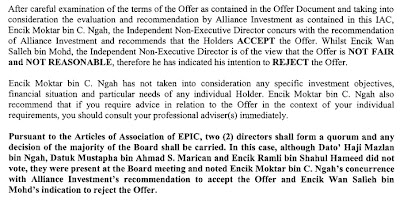 It is very, very rare for companies listed on the Bursa Malaysia that a director disagrees in public. His reasoning can be found here:

I actually completely agree with Mr. Wan Salleh, nothing to add. I take my hat off for him, as one of the rare directors to dare to speak out in public.

However, on another matter, I was not too pleased about the timetable of this offer:

Shareholders had already nine days the Offer Document with text like "no intention to retain the listing status", "mandatory acquisition", etc. They might be tempted therefore to accept already, not waiting for the independent advice that was send only yesterday. I would strongly suggest combining the two documents in one and sending them together to the shareholder. 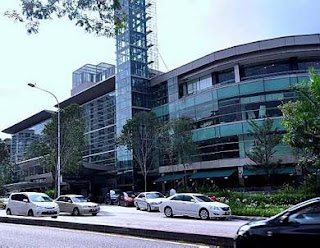 "Bandar Raya Development Bhd (BRDB) has been asked by Bursa Malaysia to clarify to its shareholders issues that have been raised in the media regarding the company's proposal to hive off key assets to its major shareholder, reliable sources said.

One of the most sticky issues related to the deal is the unknown identity behind an influential 23.6% block of shares in BRDB held under a nominee account for Credit Suisse.

The Minority Shareholder Watchdog Group (MSWG) had pointed out that this stake was very likely to be the deciding factor in whether the asset sale would go through. This is on the basis that the 23.6% block amounts to 30% of total disinterested shareholders of BRDB and in turn might comprise 50% of votes of shareholders who actually turn up to vote on the matter, which requires only a simple majority to go through."

BRDB "has been asked to clarify"? I defintely hope that some more harsh terms have been used, like "summoned" etc. I am hoping for total transparancy here, both regarding the details of this mysterious shareholder(s), and his/her voting at the EGM.