It is very rare that this kind of financial investigative reporting is done in Malaysia, much too rare, and that is a big pitty. There have been many financial scandals, but rarely have journalists or other writers investigated them in any depth.

The reason for this might be found in the following observation from Ong: "I have no doubt that there is other relevant information which Lee has access to which he still has not revealed, perhaps to avoid getting sued and also because of the on-going trials of Ling and Chan".

Malaysia is unfortunately still very much obsessed with "shooting the messenger", instead of dealing with the problems through fast and efficient enforcement, without fear or favour, and changing of procedures, rules etc. to prevent these kind of cases to happen again.

Ong's conclusion: "In the meantime, I recommend all taxpayers, current and future, to read about how part of your hard earned tax dollars is being spent". 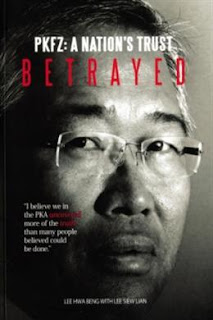 Which is the biggest financial scandal in Malaysian history, someone recently asked me. Without hesitation, I replied, Port Klang Free Zone or PKFZ. This scandal could potentially end up costing the Malaysian taxpayer RM12.5 billion according to the PWC position review report. In real terms, the financial losses associated with PKFZ may be slightly less than the BMF scandal (RM2.5b in 1983), the Maminco scandal (RM1.6b, 1980s) and Perwaja (RM10b in accumulated losses, 1990s) but none of these scandals can challenge PKFZ in terms of financial creativity and the number of high profile politicians involved.

The contribution of this book can be found in four areas.

Firstly, it provides an insider’s account of what caused this seemingly well conceived project – to replicate the success of the Jebel Ali Free Zone in Dubai – to turn into the financial fiasco we now known as PKFZ. As the former PKA chairman brought in to clean up the mess, as a professional accountant and as a former politician, Lee knew where to look for the skeletons in the cupboard, so to speak. And with access to the full reports involving this case, he knows exactly what pertinent information needs to be recorded for the sake of posterity including details on key events and personalities.

Secondly, with the able help his co-author, Lee Siew Lian, Lee is able to piece together all the relevant information in a manner that is relatively easy to understand, especially given the complexity of this case. Here, the various timelines associated with the complicated land sale, firstly from the UMNO controlled Koperasi Pembagunan Pulau Lumut Bhd (KPPLB) to Kuala Dimensi Dimensi Sdn Bhd (KDSB), then controlled by Bintulu MP, Tiong King Sing, and then from KDSB to PKA, are particularly useful as are the timelines associated with the letters of support issued by former transport Ministers, Tun Ling Liong Sik and Dato’ Seri Chan Kong Choy in conjunction with the signing of the agreements and issuing of bonds at various stages to build the PKFZ infrastructure with KDSB.

The timelines, together with the financial information highlighted, reveal how PKA was seemingly ‘duped’ not just once or twice but many times by KDSB. PKA not only paid above market rates for the PKFZ land but was also charged above market interest rates for the deferred payments.

PKA was further ‘duped’ into paying for the development of the whole parcel of land in a single stage rather than the more financially prudent option of developing the project in stages. Time and time again, KDSB, the party who sold the PKFZ land to PKA, was appointed as the main contractor for an ever expanding scope of development work, without any open tenders. PKA would end up owing KDSB RM4.9 billion, which includes the land as well as development costs, almost 5 times more than the estimated RM1 billion debt level that was deemed sustainable for PKA.

Thirdly, this book is instrumental in highlighting the exact roles and degree of responsibility of the key players in this grand saga. Given that PKA came under the MCA controlled Ministry of Transportation, it was not surprising that many MCA leaders were named. I was particularly intrigued by episodes documenting Tun Ling’s insistence on buying the land from KDSB instead of the cheaper option of the Federal Government acquiring that piece of land, which was also the preferred option of the Ministry of Finance.

Other than the two former Ministers of Transportation who are being charged in court, the potential conflict of interest involving Dato’ Chor Chee Heung, the current Minister of Housing and Local Government, who was both PKA chairman as well as a non-independent director of KDSB’s sister company, Wijaya, for a period of 4 months was also highlighted.

The potential conflict of interest involving the then speaker of the Selangor state assembly, Dato’ Onn Ismail in holding the post of chairman of KPPLB while he was the speaker as well as that of Sementa assemblyman, Dato’ Rahman Pahlil, who took over as the chairman of KPPLB and was later appointed as a PKA director are also highlighted.

Not all of the names mentioned in this book played negative roles. The support which was given to Lee by former MCA president and Minister of Transportation, Dato’ Seri Ong Tee Keat, despite the pressure put on Ong by the cabinet, was emphasized at various junctures in the book. Lee also credited four DAP politicians – Lim Kit Siang, Ronnie Liu, Teng Chang Kim and Tony Pua – for the roles they played in highlighting the improprieties associated with this case at different points in time.

Perhaps more important than all the information revealed is the fact that there are still many issues left to be resolved, which is this book’s fourth contribution. For example, the contents of the Skrine Task Force report to turn around PKFZ, which was given to Prime Minister Najib, has not been publicly revealed. The Special Task Force on this scandal, headed by the Chief Secretary to the government, has had no public announcements since its formation in 2009. PKA continues to pay KDSB so that it can pay its bondholders despite the fact that there are outstanding lawsuits by PKA taken out against KDSB. There are also recent allegations that PKA has decided to drop these lawsuits against KDSB as well as its decision to withdraw a complaint made against Rashid Asari & Co to the Bar Council, over potential conflict of interest in the legal firm’s role in acting for both KDSB as well as PKA in the PKFZ land sale. The publication of this book comes at an appropriate time, given that interest in this scandal seemed to have waned as public attention has moved elsewhere. It is a timely reminder that the taxpayer is still on the hook for the mounting losses of PKA and that many of those involved in this case have yet to be charged or convicted.

If I had any criticism of this book it would be the fact that it badly needs a list of references as well as proper labelling of the various timelines and shareholding arrangements. It would make it much easier for researchers and even the casual reader to find the relevant information after the first reading of what is a forensic and creative accounting page turner.

I have no doubt that there is other relevant information which Lee has access to which he still has not revealed, perhaps to avoid getting sued and also because of the on-going trials of Ling and Chan. I would be the first in line if he is ever to publish a follow up book revealing new information on this scandal that threatens to be the biggest in Malaysian history. In the meantime, I recommend all taxpayers, current and future, to read about how part of your hard earned tax dollars is being spent.