MUIB and PMCorp: a horrible deal from the past

"Ze Moola" attended me on a old corporate exercise from the MUIB stable. The "independent" report can be found here: http://announcements.bursamalaysia.com/EDMS/subweb.nsf/7f04516f8098680348256c6f0017a6bf/afd99bbf47849e5848256f2b001970f4/$FILE/PMCorp-Circular.pdf In short, Malayan United Industries Bhd. (MUIB) had borrowed RM 1,067,000,000 from related party Pan Malaysia Corporation (PMCorp), if would not or could not pay the amount back, a horrible and highly unsatisfactory situation for PMCorp shareholders.

The only thing MUIB could do is hive of some assets to PMCorp, but it decided to give the PMCorp shareholders shares in MUIB. Problem was that MUIB's shares were trading at only RM 0.185, that would mean that PMCorp were entitled to about 6 billion MUIB shares. Aparantly that was not what the Majority Shareholders of MUIB had in mind, therefore an ingenious scheme was designed. A pretty complicated one so that most Minority Investors would not be able to see through it. Instead of shares it would give ICULS, Irredeemable Convertible Unsecured Loan Stocks. These are Irredeemable, in other words they can not be redeemed for cash, you can (or will, there is no choice) somewhere in the future convert them 1:1 for MUI shares. They don't pay dividend like shares but interest, but even this would be paid in even more ICULS. This looks already bad for PMCorp shareholders, instead of cold hard cash they would get shares in a company that had been making huge losses over the last years. But what is simply amazing is the small number of ICULS they would receive, instead of the about 6 billion one would expect (RM 1,067 million divided by RM 0.185 = 5.8 Billion), they received less that 1.3 Billion ICULS. Minority Shareholders of PMCorp were thus hugely short changed, for more than RM 800 million.

The "independent" report from Hwang-DBS Securities Bhd. was of extremely low quality, I won't bother writing what was wrong with it (about everything), will just give their conclusion: 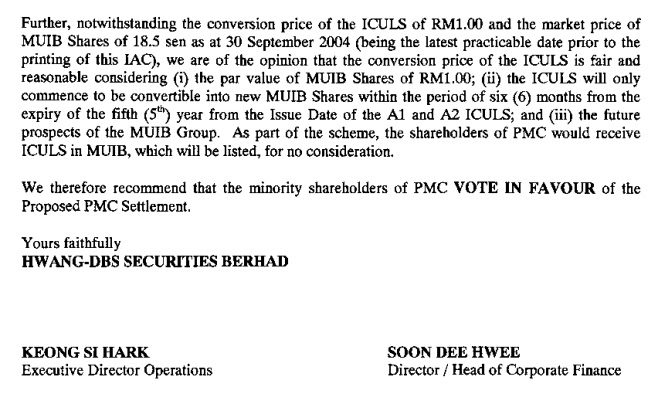 (i) The par value of MUIB shares: the par value has nothing to do with valuation. The fact that the NAV of a MUIB shares is way below the par value means it has accumulated huge losses, which is an indication of a badly managed company. By even suggesting the par value HWANG-DBS is simply deceiving Minority Investors.

(ii) The ICULS can only be converted to shares in the future: that is a disadvantage, not an advantage.

(iii) The future prospects of the MUIB group: the report was dated 12 Oct 2004, MUIB was thoroughly mismanaged, had lost Billions of RM, why would that suddenly improve? The results since then:

In total: losses of more than RM 1 Billion.

And what happened with the proposal and the circular? It was (as usual) approved by the authorities (Bursa Malaysia and/or Securities Commission), and neither the directors of PMCorp, MUIB or the "independent" advisor Hwang/DBS were ever punished in any way, shape or form.

Needless to say, the quality of the "independent" advice circulars in Malaysia has further gone down, 99% of them shamelessly support the Majority Shareholders, no matter how bad the deal is for the Minority Shareholders: "Whose bread I eat, his song I sing". And up to this very day, the authorities have not bothered to come down on the advisers.

Recommendation: Do away with the "independent" advice, it is hurting Minority Shareholder, not helping them.