MMC, RPT's and its Major Shareholder

"the MMC chairman had invoked his discretion to have a poll instead of a vote by hands and, in the end, 97 per cent voted in favour of the deal."

Let me guess who voted in favour: 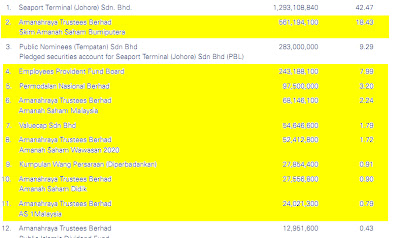 MSWG did fight this case, they tried their best. What do we read at the MSWG's website? 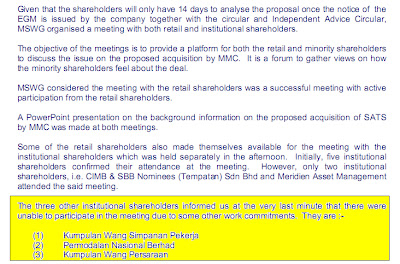 Funds like EPF, PNB, ValueCap, etc, etc, etc, I have hardly ever seen them oppose a bad corporate exercise. They had the power, they had the votes to block these horrible RPT's, but almost always they did chose to toe the line. My impression is that they were pressured to do so, or they perceived they were pressured. By doing so, they have done an unbelievable disservice, to their own accountholders, to the other Minority Investors and to Malaysia in general. They had the chance, they could have been vocal, they could have rallied the Minority Investors, they chose not to do so, they chose to toe the line, again and again and again.

My recommendation: they should simply not vote anymore, let the small shareholders vote plus the normal unit trust fund managers (the first put their money where their mouth is, the latter want to have a good long term track record). I am sure that this deal would then not have gone through.

About the Majority Investor of MMC, Tan Sri Syed Mokhtar Albukhary, the following article from The Star, dated Dec 13, 2008, is still very relevant:

"How to become very rich in Malaysia"

If you have ever wondered how to get rich in Malaysia – fabulously rich and very quickly at that – here’s a model that you might want to look at very closely. Not easy to do but if you do have a couple of projects in the bag, it will set you up for several lifetimes.

First you need connections – strong ones, the higher the better and if it goes right up to the top all the better. You need this because you need to convince the powers that be that your projects are good.

But you might ask if your projects are so good, why do you need connections? Why don’t you just go out and execute? Good questions, those. Here’s the answer - you need the state to give you something to do the deal that will help the nation.

Still can’t figure it out? See, it’s like this. You want to help the country, right? The country needs say a port. But you can’t build a port just like that. You need land to build a port. You tell the state or federal government you need land – cheap land, preferably free to build the port.

Or to take another example, you want to help the country by building a power plant. But look, you need land too and not only that you need the power to be sold. So you want an agreement – an iron-clad one to sell the power to Tenaga Nasional and to pass through all costs.

You see, that’s your reward as an entrepreneur – you get someone else to build the power plant, they guarantee the performance of the plant and someone else guarantees to buy your power and pay for all your costs. Nice deal? You bet. Billionaires have been made that way.

Or you may want to start an air hub. If you are persuasive enough, you can even convince the government to compulsorily acquire the land and sell it to you cheap. Once you have cheap land, lucrative contracts and concession agreements, the sky’s the limit.

Let’s take it a step further. If you want to realise the value of all of these things that you have and still keep control of them, it’s nice to have a listed company into which you can inject them. Inject one asset for shares and you gain control of the company.

And then inject others over the years for cash, taking the money out of the company. Who says you can’t have your cake and eat it too?

Do it right and get a flow of assets to inject in (you can do anything with discounted cash flow valuations – just change the discount rate, and presto, the value changes!), and you get a tidy flow of profits and cash into your personal accounts over the years. I mean a really tidy flow.

Just how much can you make this way, you ask? Why don’t you take a guess first? Did you say RM500mil? Guess again. RM1bil? How about five times that and you may be getting into the right order of magnitude.

One Tan Sri Syed Mokhtar Albukhary actually made some RM4.5bil that way - actually more because he still controls the listed company. (MMC’s latest RM1.7bil deal irks investors7) We are not saying he is the only one, which makes your chances of joining the ranks better – if you are connected to high places that is.

But then again, if things change – and that’s still a big ‘if’ – you might not find it so easy anymore.