Maybulk: before and after POSH

This is the share price chart until the announcement of POSH: 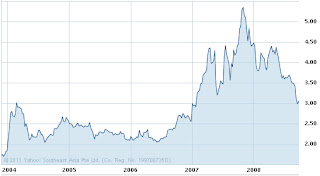 It reached a high of RM 5.40, it had come down since then due to the global economic outlook. Also there were worries about oversupply for tankers and bulk carriers. On the other hand, Maybulk would go into the recession with more than RM 1,400,000,000 in cash and short term deposits (September 30, 2008), not many companies on the Bursa Malaysia would be in such a sweet spot. Surely the management of Maybulk would use the money wisely?

But then, out of the blue, the company announced the controversial POSH deal, and things would never be the same again for Maybulks shareholders. 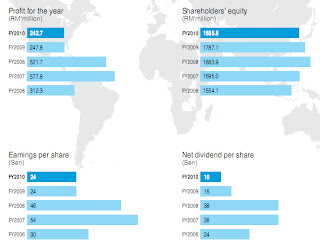 Profits down and dividend cut from 38ct to a paltry 10ct a share. Revenue and profit for the first half of 2011 would be 26% and 10% down and the investment in POSH had worked out badly.

From Ze Moola's website "Maybulk: Does poor corporate governance have a negative impact on a stock?":

Ze Moola stressed that Maybulk had bought listed securities in the past without disclosing details. I agree that companies should disclose this imporant information. In Maybulk's case it involved amounts larger than RM 100 million, why do shareholders get a detailed list of all properties and vessels, but not of the listed companies it invested in? Also, if companies don't need the cash it should consider distributing it in the form of dividends to the shareholders. 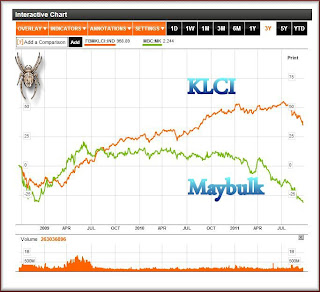 An amount of RM 100 invested in a basket of CI shares would be worth about RM 135, the same amount invested in Maybulk shares only RM 70, in other words Maybulk has underperformed by a very large amount since the announcement of the POSH deal.

We can see from the above graph that Maybulk initially held up quite well. Looking at the changes of shareholding of the Bursa Malaysia website it seems that EPF was (almost) solely responsible for that. On the day the POSH deal was first announced (September 15, 2008) EPF owned 56 million shares. Surprisingly, EPF must have liked the deal a lot, since it kept on buying Maybulk shares until February 2010 when it owned 83 million shares. Apparently they changed their mind about Maybulk since they have been net seller ever since, their current holding is 72 million shares.

To me it is a mystery why an organization like EPF bought 27,000,000 shares in a company with a large controversial Related Party Transaction as described in the previous blogs about Maybulk. And then, finally, changed its mind and started to sell 11,000,000 shares in the open market.

"Malaysian Bulk Carriers Berhad (“MBC” or “the Company”) wishes to announce that its subsidiary, Ambi Shipping Pte Ltd (”Ambi Shipping”) has signed a Memorandum of Agreement dated 25 September 2009 to acquire a vessel, Ikan Juara, from Juara Shipping Pte Ltd (“Juara Shipping”) for a cash consideration of USD23.75 million. This is a related party transaction as Juara Shipping is itself a wholly-owned subsidiary of Pacific Carriers Limited (“PCL”), a major shareholder of MBC."

But Maybulk didn't want to disclose for which price it bought the vessel for, and thus also not the profit it had made on it:

"Pursuant to a confidentiality agreement between the lessor and the lessee (PCL Group), the original cost of investment cannot be disclosed."

I urged the authorities (Securities Commission and/or Bursa Malaysia) to pursue this matter, not having to disclose the original cost of investment would mean that related party transactions can not be properly checked by minority shareholders.

I retrieved the above information from the ACRA website in Singapore at a fee. Why was this (publicly available) information not revealed to the shareholders of Maybulk, and why did Bursa Malaysia not want to press this issue further? Should all shareholders have to go through the hassle of finding out where this information can be found?