Jaipur Lit Fest gets massive crowds for books and fun

North India’s two annual cultural jamborees have this year again pulled in tens of thousands of expanding crowds from home and abroad as they reach their ten-year anniversaries – the Jaipur Literature Festival last month and the India Art Fair next year. Both provide a mixture of culture, education and entertainment, having begun in a relatively informal way without any great ambitions. 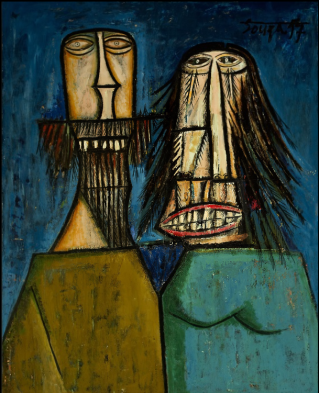 The lit fest (known as JLF) started as a small part of a wider Jaipur arts festival for two years before it became a separate event. It is now the largest in the world, while the art fair (IAF) began as a public relations company venture and is gradually achieving international recognition.

Both have their stars. The art fair’s top painting (left) was Man and Woman Laughing by F.N.Souza, one of India’s great “modern” masters. Bought for $2.6m at an auction two years ago by Ashish Anand of the Delhi Art Gallery, it appeared on an art website on February 2 with a $8m price tag – and the art fair organiser’s press release included $8m as the top end of the price range available at the fair.

That improbable figure is almost double the current $4.4m record auction price for an Indian painting, but Anand describes the $8m as “an equivalence vis a vis artists of that period in India and overseas” for a Souza work. “We believe his good works should command that price,” he told me, adding that “it is not for sale, not even at $15m”.

While the art fair has the same star artists every year, the lit fest produces new top writers from India and abroad. This time they were led by American and Indian poets, Anne Waldman and Gulzar, along with novelists Paul Beatty from the US and Alan Hollinghurst from the UK.

Both events have expanded and developed at a time when there is a increasing appetite in India for what they offer, as well as growing international interest in India’s modern culture. About a quarter of the 400 authors and other speakers at Jaipur came from abroad, as did 18 of the art fair’s 76 galleries and other exhibitors, despite debilitating (and expensive) government customs regulations on the import of art from abroad. 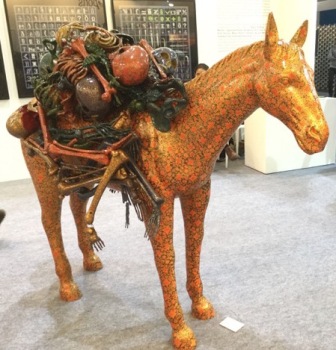 In terms of control, one of the events has been lost by India. The art fair is now foreign owned. Its founder, Neha Kirpal, has reduced her stake to just 10% with the sale five months ago of a controlling 60.3% to MCH Group of Switzerland that runs the internationally famous Art Basel fairs in Basel, Miami and Hong Kong. Angus Montgomery Arts, a UK-based exhibition and events company, bought 29.7% in 2011, which it retains.

The lit fest, which had 400,000 footfalls over five days with 80,000 registered visitors, looks firmly anchored in India. It is produced by Sanjoy Roy, head of Delhi-based Teamwork Arts whose leading investor is Ambit Capital of Mumbai. Intellectual leadership is provided by writers Namita Gokhale and Willie Dalrymple, the co-directors. 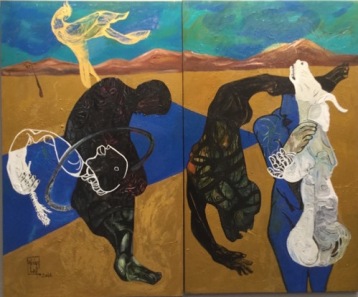 But while the lit fest does not need foreign investor involvement, the art fair will undoubtedly gain from MCH’s Basel expertise and international contacts. Despite a splendid layout and evident popularity – it reported 90,000 footfalls over four days – the fair has settled in the past two or three years into a relatively bland groove and needs a boost.

MCH Swiss Exhibitions (Basel), headed by Marco Fazzone, hopes to invest in about five regional art fairs around the world and will encourage links for them to liaise and expand. The IAF is its first investment and another is expected in Europe soon, plus one more elsewhere maybe later this year. In India, MCH hopes to work with galleries to generate contemporary and experimental exhibits at next year’s fair and open up a new and more stimulating horizon.MCH will also be increasing the role of the internet and digital communications. 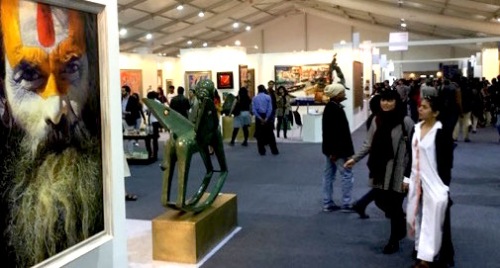 Eventually, the art fair will have an app that will enable, for example, a visitor to access information about a work by focussing on it with a mobile phone. That will generate enormous potential for increasing knowledge as well as for art sales on-line, which many galleries now say are becoming an increasingly significant part of their business.

This year, the organisers and galleries were specially cautious about what was displayed because they were worried that India’s demonetising banknote ban, which was suddenly imposed by prime minister Narendra Modi early last November, would restrict sales because of the uncertainty about the economy and lack of available cash. 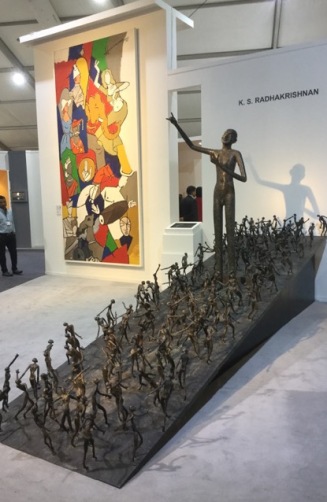 The modern art market has been flat for some time. A new report by Art Tactic, a London based analyst, says that auction prices of Indian modern art rose by just 0.5% in 2016 and sales fell by 25%.

Domestic demand for miniature paintings and other classical Indian art had however risen by 84% since 2014, indicating that collectors were widening their horizons.

The gloom seems now to have lifted as new bank notes have become available and government restrictions have eased. Many galleries on Sunday night were reporting satisfactory sales, or pending sales. The art fair organisers reported, somewhat over-optimistically, that “strong sales” from $1,000 (Rs67,000) upwards were reported by 94% of Indian galleries and 85% of international galleries. Most of those that I spoke to on the final evening however told me that their best sales were still being negotiated; some had just about broken even on the costs of attending.

The galleries’ displays were dominated by old “progressives” such as M.F.Husain, F.N.Souza, S.H.Raza and Ram Kumar, plus later but equally safe names such as Lalu Prasad Shaw, K Laxma Goud, Sakti Burman, Satish Gujral, along with some younger artists doing easily accessible work.

Ashish Anand’s Delhi Art Gallery had a display area far bigger than any other exhibitor and he was named “collector of the year” at India Today magazine’s annual art awards. He describes Souza’s Man and Woman Laughing, a 60 x 48in oil on Masonite board, as “the most iconic painting in Indian art” and says it would “beat any Picasso”.

A few more adventurous galleries showed installations like Mithu Sen’s Phantom Pain pink dental plates (above) that was on the Nature Morte stand, and a painting (below) of three Peace Owners including Donald Trump that drew attention to the Nepal Art Council’s booth. Nepalese modern art is little known and Trump and his cohorts attracted visitors and helped to put it on the map.

With its massive crowds and the excitement of top authors and other speakers who can be listened to and engaged in conversations, the lit fest is a more exciting event than the art fair and stimulates ideas and influential debate.

Controversies crop up every year. This this time it was liberals objecting to hardliners from the Rashtriya Swayamsevak Sangh (RSS), the extreme right wing umbrella organisation of the governing Bharatiya Janata Party, being invited as speakers. A few years ago, author Salman Rushdie was prevented from attending by Muslim protests over his controversial Satanic Verses novel. 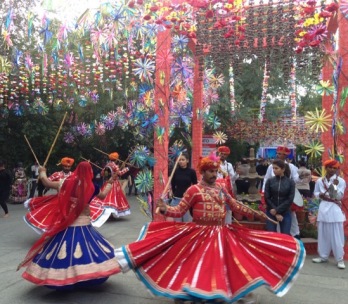 The festival has something for all tastes and interests. I mostly attended sessions on current affairs and controversies with writers of books on China’s one child policy, murder and mystery linked with the compiling of the Oxford English Dictionary, Indian politics, London’s infamous Jack the Ripper sadist, and Britain’s colonial misdeeds in India.

I moderated sessions on Modi’s banknote ban and the new world of the digital economy – appropriate since an attempt to make the festival cashless crashed on the first morning because of inadequate internet. With a total of some 200 sessions, there were plenty of alternatives for those with a more literary or poetic bent.

Both the lit fest and the art fair have now established themselves as important annual events, alongside others including the biennial Kochi festival that is on now in Kerala. Both have also led to the creation of similar but smaller events elsewhere in south Asia and the lit fest

For the future, the art fair awaits a Basel boost while the lit fest will continue to be an important part of India’s cultural diplomacy – it is staged, by invitation, in London and Boulder and next weekend will be popping up in Melbourne.

We sent an email to with a link to finish logging in.