The Kuala Lumpur Sessions Court today found two former independent directors of Transmile Group Berhad guilty under section 122B(b)(bb) of the Securities Industry Act 1983, for having authorized the furnishing of a misleading statement to Bursa Malaysia in Transmile's 'Quarterly Report on Unaudited Consolidated Results for the Financial Year Ended 31 December 2006'.

The misleading statement was with respect to the unaudited revenue figures which were reported to the stock exchange for both the 4th quarter of 2006 as well as the cumulative period for 2006.

The directors, Jimmy Chin Kim Feung and Shukri Sheikh Abdul Tawab, were at the material time, in February 2007, members of the Audit Committee (AC) of Transmile and members of Transmile's Board of Directors. They were charged in 2007 and claimed trial. The trial commenced in 2010 and the Prosecution called 11 witnesses to prove the charge against both accused. Both accused gave sworn evidence in their defence.

In passing the sentence of one year imprisonment and a fine of RM300,000 (in default six months imprisonment), the Sessions Court Judge, Justice Dato' Jagjit Singh Bant Singh stated that the public interest factor must be given paramount consideration. He said that the Audit Committee is a vital organ of the company and particularly important in the corporate governance of a company.

The judge emphasised that the AC has specific duties, functions and responsibilities and that the investing public rely on them very much. He said that in this case the evidence showed a blatant disregard of the seriousness of the concerns on the contra transactions when the AC was told by Deloitte that the contra transactions were very unusual and lacked commercial justification. These, he said, were sufficient warning bells and as AC members they should have raised these issues to the board but instead failed to do so.

The case against two other former directors of Transmile Group namely Gan Boon Aun and Khiudin bin Mohammed, who were executive directors of Transmile at the material time, is currently pending in the Kuala Lumpur Sessions Court. The charges brought by the SC against Gan and Khiudin were also with respect to misleading statements made in the same quarterly statement which was submitted by Transmile to Bursa Malaysia in February 2007. Both accused had, on 22 March 2011, been called to enter their defence after the close of the prosecution case.

This appears to be a decent result (jail sentence is the only credible punishment), but what is happening with the auditor, Deloitte & Touche, are they also being held responsible for what happened with Transmile? Although they did notice the fraud during their February 2007 audit of the 2006 accounts, they did sign of on the earlier accounts. A big difference appeared in the accounts for the year 2005. 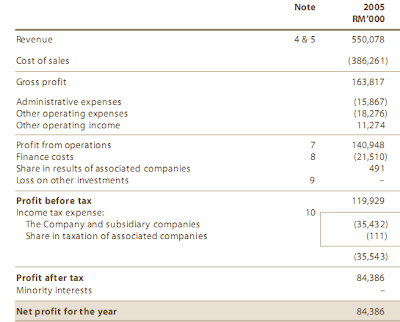 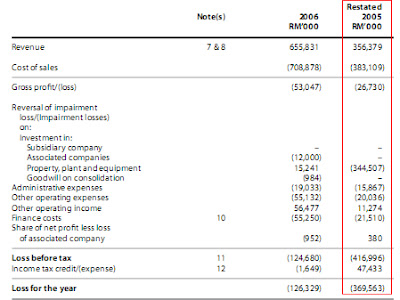 In other words 35% of the reported revenue of RM 550 million was fraudulent. Another big item (RM 344 million) refers to the Property, plant and equipment. Surely the auditor has to be blamed for missing out on those.