Eminent members of society, some of whom hold ‘Tan Sri’ titles, have been implicated in buying fake degrees from a syndicate recently brought down by the Selangor police commercial crimes investigation department (CCID).

“Many of those involved are those with status in society,” Selangor Chief Police Officer Tun Hisan Tun Hamzah said.

Tun Hisan said those who bought the degrees “know very well” that they were purchasing fake degrees and if they used those documents to get jobs or for whatever purpose, it involved the “element of fraud”.

As to whether those who purchased the fake degrees would also be charged, the Selangor CPO said police were considering that possibility.

Some of the universities “only exist in cyberspace”, while others are real institutions but with no Malaysian operations or links at all.

Tun Hisan urged parents whose children had degrees from the Jakri Education Group, or employers with staff who had the same credentials, to verify their qualifications. 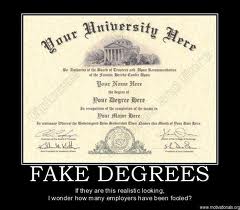 I did a few Google searches with the above mentioned universities, and did indeed get quite a few hits of directors of listed Malaysian companies.

Will Bursa Malaysia or any of the listed companies take action?