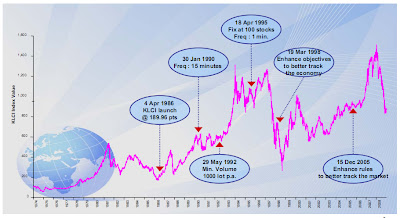 Assuming a value of 100 on 1-1-1974 and a value of 1430 on 17-9-2011 the total return is 1330%, with a year on year return of 7.3%. This return is not that bad, it must have been clearly higher than the return on a Fixed Deposit, on the other hand the investors had to endure huge swings since the KLCI has been very volatile as the graph shows. I think however that the real return for the average Minority Investor is clearly lower than that.

The factors involved are:

My best overall guess of the long term yield including dividends and costs incurred of a portfolio is in the range of 4-5% per year. This is rather disappointing given the GDP growth of Malaysia. Western countries have had less growth in GDP but higher returns on investing in shares. I think that the reason for this is the lower degree of Corporate Governance in Malaysia, which is directly influencing these returns. Related Party acquisitions at (highly) inflated prices and General Offers with delisting threats at (very) low prices are directly lowering returns.